Prof. Tomislav Nedelkovic-Baynov was born in Sofia, Bulgaria into a family of musicians. His first performance on stage was at the age of five. A year

later he won the first prize at the National Piano Competition “S.Obretenov” in Provadia/Bulgaria. A great influence on the further development of his musical approach were the numerous artistic contacts he established with renowned Bulgarian Pianists and Composers such as P.Wladigeroff, L.Pipkpov, as well as V.Savova (who studied with L.Kreutzer and Gottfried Galston, a student of Busoni) with her unforgettable piano lessons. He continued his studies at the Academy of Music in Sofia under Prof. K.Ganev and J.Ganeva, pupils of H. Neuhaus, who have contributed to his success and awards. After his trip to Vienna and Paris in 1981, Prof. Baynov started performing in concerts in Western Europe. End of 1981 he settled down in Germany and graduated in 1990 with highest honours under the expert tutorage of Prof. Johan van Beek at the State Academy of Music in Trossingen. Further studies followed with K.H.Kaemmerling and V.Merzhanov. He won prizes and awards in many important international competitions in Italy, Portugal, the Czech Republic, Germany and Bulgaria. Since 1982 he was teacher in a number of music institutions in Germany and in 1999 was appointed Professor at the National Music Academy in Trossingen, Germany. His pupils have been awarded many winner prizes in major international piano competitions and he has been a jury member of many international competitions in Italy, Canada, Germany, Bulgaria, the Czech Republic, USA, etc. In 2002 the University Quing Dao, China awarded him the title of Honorary Professor. Prof. Baynov is the founder and the head of the unique Baynov-Piano-Ensemble, which is performing a wide repertoire of piano ensemble music throughout the world. His successful concert activity (with a repertoire of more than 40 piano concertos) includes performances in many countries in Europe, Asia, North and South America, Australia and Africa, as well as 20 CD recordings. 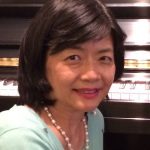 Keiko Alexander is a graduate of the Juilliard School in New York where she studied piano with Sascha Gorodnitzki and Janina Fialkowska, and has also studied privately with Bela Siki in Cincinnati and Vlado Perlemuter in Paris. While in Cincinnati she formed the Alexis Piano Trio with members of the Cincinnati Symphony Orchestra, which performed throughout Ohio, Kentucky, Indiana, and Tennessee. In addition, Keiko taught in the Piano Preparatory Department of the University of Cincinnati College-Conservatory of Music, and served as Chair of the Piano Department from 1996 to 2000. In 2000, she was invited to perform for Hillary Clinton at a Campaign Event in Cincinnati.

Since moving to Vancouver , Keiko has been a very active teacher, has held master classes at the BC Conservatory of Music, and performed as a soloist and chamber musician on numerous occasions in Canada, the United States, and Japan. She has served as an adjudicator for the UBC Concerto Competitions, Burnaby Clef Club, BCRMTA Student Performers Guild Festival, National Music Teachers Association, BC Conservatory of Music Festival in BC, the World Piano Competition in Cincinnati, MTNA (University of Kentucky in Louisville, Kentucky) and the American College of Musicians Piano Guild. Keiko has also adjudicated in Germany for the International Piano Competition for 6 Hands and 8 Hands in Marktoberdorf, and in Tokyo for Japan’s Piano Teachers’ National Association (PTNA).

Bruce Lin has performed throughout Canada, China, Mexico, Taiwan, and the USA. He is an active chamber musician. He has been featured in music festivals including the Chamber Music Unbound, Las Vegas Music Festival, Mountain View International Festival of Song and Chamber Music, Scotia Music Festival, and Tuckamore Chamber Music Festival. His performances have been heard on U92 West Virginia Radio Station, San Antonio KPAC Classical, Vancouver Fairchild Radio, and Mexico City Cultural Channel. Currently he is the Director of Piano Studies at Amarillo College.

“It is fascinating to experience how a single person can capture such a broad spectrum of characters and tone colours with one and the same instrument.” – Badische Zeitung

Katharina Treutler has given numerous recitals in countries around the world, performing in Europe, Asia and the United States. As a soloist she has played with leading orchestras such as the London Symphony Orchestra, the San Francisco Symphony, the Royal Stockholm Philharmonic Orchestra and the Tokyo Philharmonic Orchestra.

She was born in Erfurt and began taking piano lessons at the age of seven. After completing her secondary education, Treutler studied under Bernd Goetzke at the University of Music, Drama and Media in Hanover. She went on to continue her studies at the Tokyo College of Music and in Paris, where she was a student of Jacques Rouvier at the Conservatoire National Supérieur de Musique et de Danse de Paris and was awarded a Master’s degree, as well as studying chamber music under Claire Désert and musicology at the Université Sorbonne. Between 2011 and 2013 she was a student of Dmitri Bashkirov at the Escuela Superior de Música Reina Sofía in Madrid. She studied under Eric Le Sage at the University of Music Freiburg and passed her subsequent soloist’s diploma with distinction.

Throughout her career Katharina Treutler has won several international prizes. In February 2015, the album Final Symphony was released worldwide with Katharina performing works by composer Nobuo Uematsu. Featuring pieces performed with the London Symphony Orchestra, as well as solo performances, the album was recorded at London’s Abbey Road Studios and reached number one in the iTunes Classical Music Charts in more than ten countries, as well as the Classical Album top 5 of the Billboard Charts and the Official Charts (UK). Her other albums include a recording of Brahms’ Piano Concerto No. 1. In 2018 Katharina’s album BEYOND was released with works by Bach, Liszt, Prokofiev, Messiaen and Ligeti.

Katharina Treutler has been teaching at the University of Music and Theatre “Felix Mendelssohn Bartholdy” in Leipzig since 2016. She is a Steinway Artist and currently lives in Berlin.

Married Vancouver-based pianists Scott Meek and Clare Yuan are The Meeks Duo, an acclaimed four-hands piano duo whose aim is to make every performance a uniquely enjoyable experience. Already well-established performers in Canada, Scott and Clare recently made their Asian debut with concerts in Japan and Taiwan, including at the prestigious Taiwan National Concert Hall. During the first phase of the Covid-19 pandemic, they performed 22 weekly online concerts from their home from March to August 2020.

Scott maintains a busy schedule as one of the most in demand collaborative pianists and chamber musicians in Greater Vancouver. He has performed concertos with major orchestras in Canada, and is a top prizewinner in several national and international competitions in North America. Scott received a Doctor of Music degree from Indiana University and also studied at the Oberlin Conservatory. His principal teachers were Menahem Pressler, Alvin Chow, and Carole Pollard.

Clare runs a full studio of eager and talented students, who are inspired by her innovative teaching style and frequent performing opportunities. She has won scholarships and made her debut as a soloist in New York City, and as a conductor in Vancouver in 2013. Clare received a Master of Music degree from the Manhattan School of Music. She also studied at UBC and University of Victoria. Her principal teachers were Jane Coop, Arkady Aronov, Eva Solar-Kinderman, and Christine Eschman.

Scott and Clare combined musical forces shortly after they got married in 2013. They love the unique closeness of two musicians sharing a single instrument, and are happy to share this love with you! 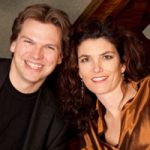 Elizabeth and Marcel Bergmann have been performing together as a duo since 1989. They studied with Arie Vardi at the Hochschule fur Musik und Theater, Hannover and with Jean-Eudes Vaillancourt at the Universite de Montreal. The duo received first prize at the International Chamber Music Competition in Caltanissetta, Italy, and were laureates of the 4th Murray Dranoff International Two PIano Competition. In 1993 they became members of the young artists’ roster of Yehudi Menuhin-Live Music Now. Their recitals and concerts with orchestra have taken them to many parts of the world, including the United States, Italy, Germany, Holland, Greece and Canada. The duo has appeared at the celebrated Gilmore International Keyboard Fstival, the Banff Arts Festival, the Royal Bank Calgary International Organ Festival and Competition, the International Two Piano Symposium and Schubertiade, Miami, the Tage fur neue Musik, Darmstadt, the Braunschweiger Kammermusik Podium and at the EXPO 2000, Hannover. The duo has appeared with several North American orchestras such as the Calgary Philharmonic Orchestra, the New World Symphony and the Canticum Novum of Santa Fe. They have made recordings for the CBC, for several stations of the ARD in Germany and for National Public Radio in the USA. The duo has made several CDs, which appear on the CordAria and Arktos labels and has recorded William Bolcom’s complete works for two pianos for Naxos. As founding members of the International Piano Quartet they had the opportunity to record Stravinsky’s Les Noces under the direction of Robert Craft at the Abbey Road Studios in London. The CD first appeared on Koch International Classics and has been re-released on Naxos.

Jeroen Van Veen started the study of piano at age 7. He joined the Utrechts Conservatorium (HKU) with teahcers Alwin Bar and Hakon Austbo. Since 1988, he has played concerts and recitals throughout Europe and North America and has recorded over 50 CDs for Mirasound, Koch, Naxos, Brilliant Classics and his own label, PIANO. Van Veen’s compositions are mostly solo piano works and could be described as mostly minimal music. His latest recordings has also focused on minimal music, including a 9 CD Minimal Piano Collection box set, somewhat dominated by the music of Philip Glass, the complete piano music of George Crumb and a collaboration on recording all Steve Reich’s Chamber Music. Among other functions, Van Veen is the director of Van Veen Productions, Piano Mania, and the Simeon ten Holt Foundation. He is also artistic director of Murray Dranoff Two Piano Competition, where he and his brother, Maarten an Veen, were prize winners in 199